Finding love is something many of us hope for, including people with disabilities. Lauren and Scott met while they were participating in programming at Favarh (The Arc of Farmington Valley). At first, they forged a strong friendship, but as the years went on, their relationship eventually blossomed into love. Now married and living together independently, Scott and Lauren spoke with us about their journey and what it means to make their own choices in love and life.

How did you meet? 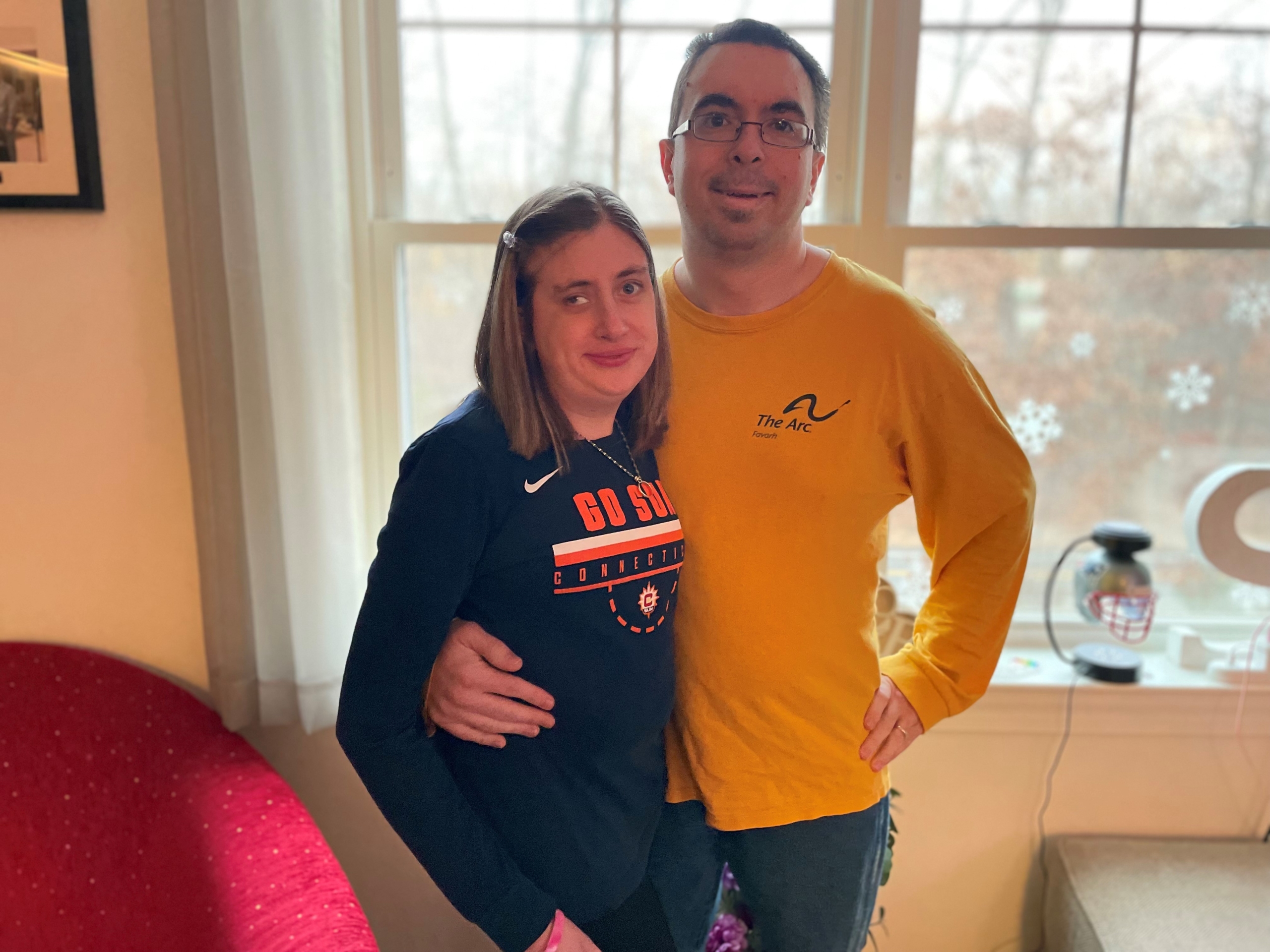 LAUREN: At the age of 21, I was looking for a job and found Favarh. I was nervous and didn’t know who was going to be friends with me, but I met Scott on my first day. It was amazing because that night, I went home and I’m like “Wow, I think I made an actual friend.” When I met him, he stuck by me all the time. He worked with me for two years at Michaels, he and I had a very good friendship. Everyone kind of knew that he and I would end up together. I was coming out of a relationship, and I tried some dating sites. I thought it would be really nice to see what it was like.

SCOTT: I actually talked her out of it.

LAUREN: He told me I shouldn’t be on apps, and said “Let me be the one to be with you.”

SCOTT: I didn’t want anything to happen to her.

LAUREN: I was nervous because I didn’t know what to expect out of him. I had been verbally abused before. But I knew at some point, there’s got to be someone out there who can put me first and for me to rely on.

How did you start dating?

LAUREN: No one asked the other person out, we just did it together. We just wanted to go out and see what it’s like.

When Scott and I became boyfriend and girlfriend, my grandfather passed away. It was really weird timing. For me to have Scott was really special. He was the first one I messaged after I heard the news because I knew I needed my friend to understand what was happening. He came to my grandfather’s memorial service and it was so nice.

My mom and dad were very supportive of us going out and took us places (and still do.) It kind of amazes me now to look back and say wow, this really has happened. He’s been by my side throughout the years. It’s really hard to be away from him.

We got engaged in 2019. He needed my parents’ permission to propose to me. Scott and my dad went out to dinner together, and then Scott and my mom separately. 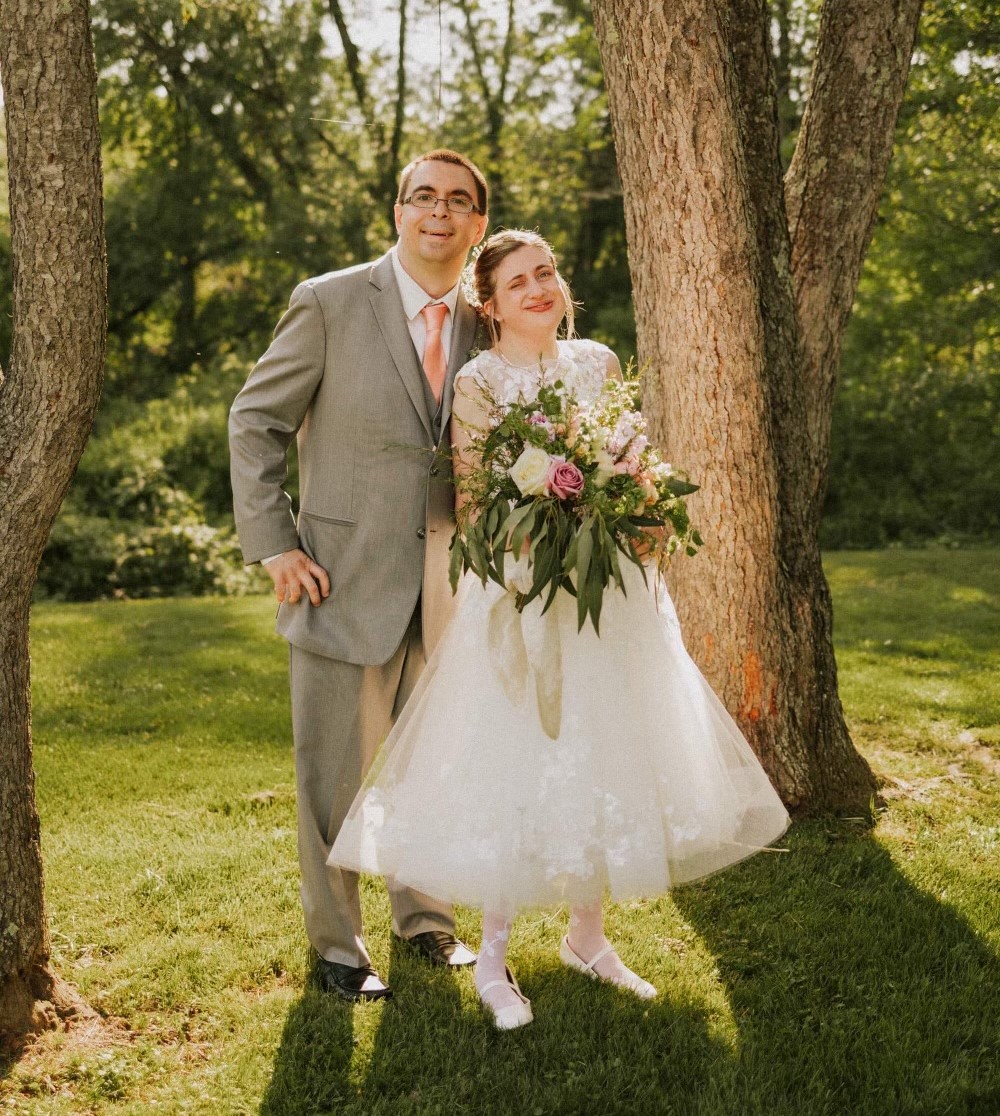 Why was getting married important to you and what does it mean to you? What was the process like?

LAUREN: Just the fact that we’re together. Knowing he’s there for me is a great feeling.

SCOTT: Relying on each other more. Knowing that we’re husband and wife.

LAUREN: Planning our wedding was a long process. It was the hottest day of the year that we got married. He wanted to wear his bathing suit under his wedding suit! It was really hard trying to figure out everything. I have a brother who lives in Denver, and he was a part of the wedding. We had two best men and I had junior bridesmaid and a maid of honor. It was really fun having my hair and makeup done. Everyone in the wedding sat with us at our table. All I wanted was a small wedding, but we ended up inviting a lot of people!

Why is being independent important to you?

LAUREN: It’s important to be in control of what you do.

SCOTT: Our parents don’t come over as much as they used to. We’ve had less staffing, they’ve backed off of helping us. They used to observe and supervise us cooking dinner, they used to check on us a lot more. Now we do our own laundry, plan our days, go to work, and come home. It is awesome to be able to stay up as late as we want. And now [living together], we don’t have to message each other – we don’t have to use our phones as much because we’re right here.

What do you see for your future?

LAUREN: Having kids—someday being parents. I can see us having independent jobs.

SCOTT: Growing old together. I can’t imagine being with anyone else.

The post From Friendship to Lifelong Love: Scott and Lauren’s Journey appeared first on The Arc.